Each time Firewind released an album over the last 20 years, it wasn’t just the brilliancy of exceptional guitarist Gus G (Ozzy Osbourne, Arch Enemy, Dream Evil) that fans were in awe of, but also the skills of every one of the band’s vocalists. Fantastic riffs, hooks and solos by the gifted hands of guitarist Gus aside, it’s the great vocal melody – an integral part of every Firewind song – that’s causing a stir. In that respect nothing has changed in their newest album, simply titled Firewind, quite the contrary: with his charismatic voice new member Herbie Langhans (Avantasia, Radiant, Seventh Avenue, amongst others) refines each and every last one of the ten new songs and infuses them with an expressive force that is remarkable. “With Herbie I feel like we’re doing a relaunch of the original Firewind cast, because his singing style bears a certain resemblance to that of Stephen Fredrick, our first vocalist,” comments Gus. “I’m proud and happy that we can continue with the tradition of great Firewind vocalists thanks to Herbie.” On 15 May 2020 at the latest, when Firewind will be released via AFM, the public will hear just how competently new band member Langhans has stepped up to this challenge.

Gus G and Herbie Langhans got to know each other back in the autumn of 2019, when the Firewind leader was looking for a suitable replacement for Henning Basse after the tour with Queensrÿche. “I remembered Herbie singing for Sinbreed and how amazed I always was by his vocal performance”, he recalls. “So I did some research on YouTube, had my record company reach out to him and got right down to it: ‚Hi Herbie, here are ten new songs, can you help us? Deadline is mid of January.‘ Luckily, Herbie agreed immediately and got familiarised with everything in no time.” Just a few weeks later the recordings for Firewind were a done deal, ready for Swedish sound engineer Tobias Lindell (Europe, Avatar, H.E.A.T.) to mix them in ‚Lindell Audio Studios‘.

The result is impressive indeed. Firewind boasts 11 prime examples of Melodic Metal songs. The skill, craftsmanship and power bleeds through every note, a passion you can almost taste, with hymnal melodies as a particularly outstanding feature. Stylewise, the band actually broadened their range compared to earlier releases: With 'Welcome To The Empire' and ‘Rising Fire’ you’ll get your typical Firewind blend. Whereas ‘Overdrive’ dressed in a groovy rhythm and reminiscent of Dio/Black Sabbath (Gus: “That was a new direction for me. The song was supposed to be just a little bonus number but it took on a life on its own and was doing so well that it just had to be on the album”) and ‘Space Cowboy’ in all its retro flair glory will take you by surprise. But there’s still more: ‘Orbitual Sunrise’, ‘Longing To Know You’ and the above-mentioned ‘Space Cowboy’ are connected through their lyrics. ”It’s kind of a Sci-Fi story about the overexploitation of nature seen through the eyes of a lonely astronaut, orbiting earth in his space capsule,” Gus explains.

It`s official: The band has once again brought their full potential, making Firewind a more than worthy successor of their 2017 concept work Immortals. “The new album is an exciting and fashionable mix of Hard Rock and Power Metal. These songs are fresh but tough and melodious at the same time. In my opinion the record sounds exactly as a band in our genre is supposed to in the year 2020. But of course, the key feature lies with the quality of the composition, which has been our main focus again,” comments Gus. There’s nothing more to add to this succinct assessment! 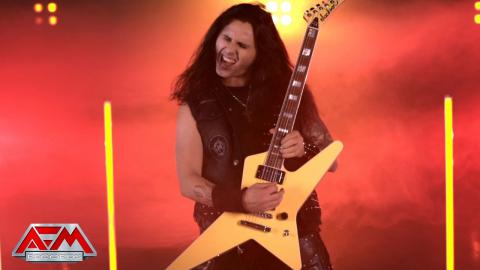