Twenty five years after the release of their last album, ALLISON wants to have another ‘crack’ at it. “They Never Come Back”, released on 13 November 2020 through 6003 Records, is the Band’s latest work.

The record is packed with catchy songs, bristling with optimism and the band’s love for playing.

In the ‘90s, ALLISON was an integral part of the Swiss rock scene. With two fantastic albums they conquered the hearts of rock fans in in Switzerland and around Europe. The gripping ballade “I’ve been waiting” was used by clothing giant C&A for their worldwide advertising campaigns. In an adapted version known as “Dreams of glory”, the song was on heavy rotation throughout the summer of 1994 as the German national TV station ARD’s theme song for the Football World Cup.

ALLISON cemented their reputation as an exciting live act with headlining gigs throughout Europe. They also featured as the opening act for major international superstars including Bon Jovi, Van Halen, Asia and Pink Cream 69 among others.

The undisputed highlight of these concerts arose on 10 June 1995 with the opportunity to open up for Thunder, Van Halen and Bon Jovi in the sold-out St. Jakob’s Stadium in Basel, Switzerland in front of 55,000 screaming fans.

A quarter of a century later, the time finally seemed right for ALLISON’s founding members Janet La Rose, Jonny Stutz and Pierce Baltino to produce a 3rd album. Now they’re ready to once again put the ‘Pedal to the Metal’.

Their latest tracks were recorded by Tommy Vetterli (Eluveitie, Cellar Darling, Keator) and Claudio Cueni (Beware Of Darkness, The Temptations, Boyz II Men) at New Sound Studios, Switzerland. The latter was also responsible for mixing and mastering at Candyhouse East Studio.
The brand new and highly anticipated album - “They Never Come Back” - was released by 6003 Records on November 13th, 2020 and entered the Swiss-Charts on 6th position. 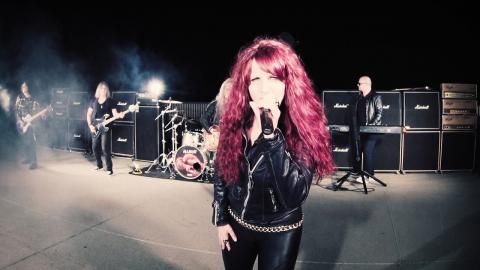