DGM started writing new music in the spring of 2019 with the overall process taking almost one entire year since it was the band’s desire to push themselves beyond any previous boundaries set by their previous works. Truly, no small feat given the band’s catalog. The end result is “Tragic Separation” an album where the band ticks all the boxes of the Progressive Metal genre, but adds more and more of their own personal identity and approach.

You can still find all the trademark elements of DGM’s sound with sweeping choruses, technical passages, lightning fast fretwork, big vocals, and bombastic transitions, but the care and the dedication to the songwriting emerges in phenomenal songs which carefully encompass everything that goes from Symphony X to a more classic hard rock sound, even giving a nod to the Kansas sound in the title track. The playing is faultless as usual and the melodies are perfectly woven into the killer guitars, epic keyboards, and pounding drums.

Not only are the songs presented her simply great music, but “Tragic Separation” is a concept album about life and everyone’s path they go down between the choices they make and the subsequent consequences they bring to human lives. Among the doubts and second thoughts about the choices made, there is one that echoes in the protagonist’s soul: what if the answer for everything was the path itself? An unanswered question which is another starting point for a new quest... another beginning.

DGM originally formed in 1994 as an entirely instrumental band. Their first official release is the self-produced mini CD ‘Random Access Zone’ but the full album comes out in November ‘97: ‘Change Direction’. The album received great responses everywhere: Italy, Germany, Finland, Denmark, etc. which prompted to start an Italian tour that gave the band the reputation as one of the most promising progressive Italian act in those years.

With the new drummer Fabio Costantino (ex-Carnal Raptor), thanks to his great technical experience and his fine musical taste, DGM entered the studio for their incredible second album: ‘Wings Of Time’ (top album on the most important Italian magazines “Metal Shock”, “Flash” and “Metal hammer”). In Japan the CD sold over 4,000 copies in the first 10 days. The band was also contacted by BURRN! for an exclusive interview that enlarged DGM reputation in the worldwide musical scene.

In 2002 Scarlet Records took the Italian musicians under their wings, asking them to sign a contract and laying the foundations of a new album.

‘Hidden Place’ was released in May 2003 and was destined to be another hot shot for the band, with a new progressive sound from the new keyboards player Fabio Sanges (Abstracta). The fourth album received excellent reviews on all the magazines and web magazines from all over the world and it was time for DGM to take part at the Gods Of Metal (2003 edition).

‘Misplaced’ was born in February 2004; What people heard in this 8 tracks CD was a great example of Prog-Power at its best coupled with catchy melodies, hard rock sound, power walls of pure metal and dreaming solos and a great production thanks to great work of Giuseppe Orlando's (Novembre) Outer Sound studio. Like ‘Hidden place’, also ‘Misplaced’ has been considered by both the magazines and the audience a great album, and several live dates followed the release.

In 2005 Simone Mularoni (Empyrios) replaced Diego Reali, Simone is considered simply a genius of the six strings, who naturally owns the peculiar DGM sound. With Simone DGM had the possibilities to reach a more fresh sounds due to his metal influences and his experience as a sound engineer and producer at the Fear Studios. With such a great axe man DGM needed another monstrous keyboard player able to be the right arm of Simone, Emanuele Casali (Astra, ex-Empyrios) was the best and only possible choice after Fabio Sanges left.

Simone and Emanuele gave to the new songs a renewed touch of class and the result of his experience is all included in "Different Shapes" released in 2007. The media claims ‘Different Shapes’ as the best work of DGM so far, a beautiful production managed Simone himself made Rock Hard and Metal Hammer awarding it as TOP ALBUM.

In February 2007 DGM announced Mark Basile (B.R.A.K.E., ex Mind Key) as the new singer of the band. Mark was chosen among several auditions throughout Italy, Europe and America after Titta Tani left the band.

In Autumn of 2008 DGM give light to the sevnth album of their career: ‘Frame’

‘Frame’ represent a master chief in DGM career.
With this album the band push their fame on a higher level, they toured for almost 4 years around the world.
They took part to the biggest metal fest and supported Symphony X on thei european tour, sharing the stage with Pagan's Mind to.
In 2013 DGM are back with a new studio album "Momentum".
This album represents the full stylistic maturity of a band now on top of its game, collecting 11 new songs made of beautiful melodies, classy arrangements and top notch musicianship. To add an extra value to an already astonishing album, DGM have tapped legendary singer Russell Allen (Symphony X, Adrenaline Mob) to guest on the opening track ‘Reason’, and Norwegian guitar virtuoso Jorn Viggo Lofstad (Pagan’s Mind) to contribute with a solo on the track ‘Chaos’. ‘Momentum’ was recorded, mixed and mastered by the band’s own guitarist and celebrated producer Simone Mularoni at Domination Studios in San Marino, Italy.

Three years of hard live activity pushed the band to tour around the world, they played for the second time at the famous Prog Power USA and toured for the first time Japan as headliner. All these events helped the band visibility to an higher level 'till the new deal with Frontiers Records.

In March 2016 the band signed a multi-deal album with Frontiers Records and their now releasing their 9th full lenght of their career: The Passage It is the culmination of almost 20 years of hard work that started back in 1997 with the release of their self-produced mini-album, Random Access Zone. The band went through several incarnations and lineup changes during the years, but since singer Mark Basile joined the group in 2007, DGM evolved and developed their sound into what they have now become.

It was probably the release of Frame (2007) that pushed the band into the top of the league of international prog metal. It was also on the strength of this material that DGM managed to tour for almost four years around the world, taking part in some of the biggest metal festivals, supporting Symphony X on their European tour, and sharing the stage with Pagan's Mind too. In 2013, DGM came back with Momentum, an album which showed the full stylistic maturity of a band which felt fully confident with their abilities, both on the songwriting and the musicianship side.

The last album was promoted with more shows and after several gigs in Europe, they performed for the second time at ProgPower USA and started their first Asian tour in November 2014 playing Beijing, Tokyo, Nagoya and Osaka as headliners.

The new album, The Passage is another substantial step forward for DGM. Sounding like a hungry, urbanized version of Symphony X, with substantial hard rock influences, the new record is remarkable in several aspects. The compositions are phenomenal, with sweeping choruses, technical passages, lightning fast fretwork, big vocals and bombastic transitions. The playing is simply faultless and the melodies are perfectly woven into the killer guitars, epic keyboards, and pounding drums!

"This album can easily be seen as our most ambitious work to date," says guitarist and producer Simone Mularoni. "This time we tried to evolve to an even more personal sound. We took all the elements we developed through all these years and we tried to take them to the limit. Throughout the whole record you will hear a recurrent musical theme. Instead of doing a usual concept album with the lyrics, we decided to do a sort of musical concept with this melody that repeats in every song but every time with different time signatures and keys," tells drummer Fabio Costantino. "This album will offer to the listener a key for a positive dimension. A path made of sound vibrations: The Passage to our dreams and hopes," concludes bassist Andrea Arcangeli. 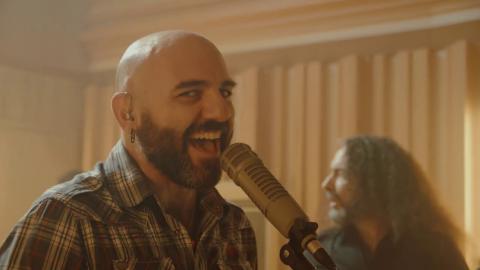