Few modern bands embody the true spirit of heavy metal as well as Savage Messiah, whose dogged perseverance, passion and conviction harks back to the hard graft of metal’s masters of old.

On the band’s fifth full-length album ‘Demons’, due this spring, this has never been more evident. Vintage bullet-belt influences meet modern metal with 11 new songs that will feel as much at home on the airwaves and playlists as reverberating around sweaty mosh-pits.

Singer and guitarist Dave Silver describes a band reborn on the new record. “I looked at what we’ve done in the past and knew we could be taking this band way further,” says Silver.

It only takes one listen to ‘Demons’ to understand exactly how Savage Messiah – completed by guitarist David Hruska, bassist Mira Slama and drummer Charly Carreton – are ensuring their fresh new sound will infect ears and conquer minds.

Without sacrificing any of the razor-sharp precision and earth-shifting heaviness that saw them rise out of the UK’s underground, there’s a redefined sense of melody and cohesion to the latest opus as well as a newfound majestic flair.

“We felt like we had a good shot at running everything ourselves, properly and professionally,” Silver explains. “And it worked out well – we toured with Cradle Of Filth and Exodus, plus headlined and sold out shows of our own in Japan, along with Wacken, Download, Hellfest, Graspop and loads of other great opportunities.

“That’s what made us think this next album needs to push way beyond that and reach more people than ever before.”

‘Demons’ is punctuated by sentiment more personal than anything the band have shared in the past.

“What Dreams May Come was partially inspired by one of Shakespeare’s lines from Hamlet,” reveals Dave, who now resides in Verona, Italy, where his young daughter was born in 2017, and commutes regularly for managerial duties in London and Los Angeles in between time on the road.

“When you become a parent, your worries become multi-faceted,” he explains. “You worry about what happens to you and those around you. It’s the weirdest thing, the love you feel for your child, almost indescribable. I’ve never thrown myself into my lyrics like that before.”

‘Demons’ also sees a shift in production for Savage Messiah. After making four albums with Scott Atkins, the group enlisted producer David Castillo, renowned for his work with metal stalwarts including Opeth, Dimmu Borgir and Soilwork for the recording sessions at Jens Bogrens’ Fascination Street Studios in Sweden.

Joined by Carcass drummer Dan Wilding and touring drummer Ali Richardson for the Sweden sessions, the band took a spontaneous approach to developing the 11 new tracks the comprise the record.

“This time we went into the studio with no songs and everyone thought we were absolutely mental,” laughs Dave.

Silver says that the band’s first four records taught them that the worst time to write music was prior to going into the studio, and decided to take a more organic approach to their fifth.

“It’s better to catalogue little unfinished ideas to build on,” he continues. “Sure you need that initial inspiration in the studio, but let the songs write themselves and stay guided by only your own musical taste.”

One of ‘Demons’ biggest surprises is undoubtedly its cover of hit single Parachute by American country/folk Grammy winner Chris Stapleton – cleverly rewired into a hard rock format by trading the banjos and acoustics for loud and proud electricity.

It’s the kind of anthemic arena rock Savage Messiah have always flirted with but never quite dared to fully imagine.

“Funnily enough, Oliver got obsessed with Chris Stapleton and kept playing this song in the office,” reveals Dave.

“I noticed the arrangement almost felt like a heavy metal song, so wanted to see what we could do with it.

“Reworking pop music into something heavier isn’t anything new – just listen to Judas Priest’s take on The Green Manalishi or Diamonds And Rust! 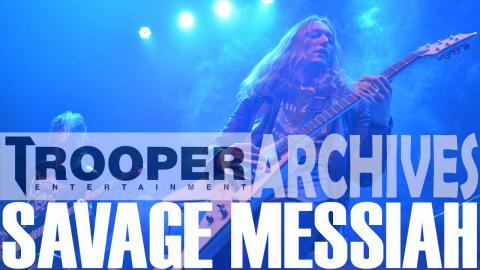