PROFESSIONAL CAREER
bandleader Seeb counts the history of ORDEN OGAN , as you know it today, from 2008, with a reminiscence to the garage days, when it comes to the name.
2008 the debut record “Vale” was released via yonah records, featuring an new, strong and stable lineup with drummer Sebastian “Ghnu” Grütling, keyboardist Nils Weise, guitarrist Tobias Kersting and bassplayer Lars Schneider. the artwork was created by artist Andreas Marschall, who is known for his works with bands like blind guardian, running wild, kreator, hammerfall or nightwish to name a few. a trademark the band sticks to until today. “Vale” also shows band-mascot “ALISTER VALE” - an immortal who is cursed and has to move on and on, but everything he leaves decays behind him… an elaborate CGI videoclip for the song “The Lords Of The Flies” was released the same year.
the band also signed with direct management and dragon productions for the management and booking issues. due to impressive sales, strong press response and a good festival appearances ORDEN OGAN quickly gained the attention of several bigger record labels, signing with longtime partner AFM RECORDS, who re-released “vale” as a remixed and remastered digipack version. the same year the song “We Are Pirates”, shortly before released on youtube, was featured in the tv trailer of the formula one broadcast (monza 2008) on german tv station RTL (approx. 11 million viewers).

2010 the even more successful follow up “Easton Hope” was released via AFM with guest performances from Thomen Stauch (former blind guardian) and Majk Moti (former running wild). the release was followed by festival appearances at wacken open air, the renowned rock hard festival and their first european tour supporting tiamat. 2010/2011 ORDEN OGAN toured with van canto (“we sing some metal songs” tour), did another european tour with grave digger (“the clan comes to your town” tour) in 2011 and another tour with van canto (“no silence to the end” tour) in 2011. due to the timeconsuming touring activities longtime drummer Ghnu, keyboardist Nils and bassplayer Lars left the band and were quickly replaced by the professionals Dirk Meyer-Berhorn (drums) and Niels Löffler (bass).

2012 the highly anticipated new record “To The End” was released via AFM RECORDS and hit the german album charts at #41. the videoclip of the first single “The Things We Believe In” today counts over 3.5 million clicks on youtube. “To The End” was voted rock hard (ger) album of the year #15, metal storm #3 readers choice / #1 staff choice, powermetal.de album of the year #14, and the band reached high positions in several magazines soundchecks and readers charts.
two more videoclips were released for “to the end” – “Land Of The Dead” and “Masks”, at the same time title track for andreas marshalls horror movie “Masks” that features the film music of ORDEN OGAN mastermind Seeb.
the limited digipack version of “To The End” contains a dvd with the 2010 live show from the wacken open air.
the release was folled by a european tour with rhapsody and freedom call (“born to sound cinematic” tour) and impressive festival appearances in 2013, such as rock harz open air and summer breeze open air.

2014 ORDEN OGAN entered Seebs GREENMAN STUDIO to (as usual) to work on the new record “Ravenhead”. Seeb, who mixed records of “rhapsody of fire”, australias “vanishing point”, or Victor Smolskis “almanac”, to name a few, evolved stronlgy as a producer.
carl frederic from metalunderground.com states “the album is phenomenally produced (by Levermann himself, who has quickly become one of the best producers in Europe)”.
the band only left the studio for a few selected festivals like trondheim metal fest (no), made of metal (cz), metal splash (ger) and their first ever usa performance on sept 12th at prog power usa (atlanta, ga) that was met with euphoric acclaim.

on january 16th 2015 “Ravenhead” was released on the kick-off date of the world-wide-(r)evolution-tour, supporting hammerfall. “Ravenhead” hit the charts at #16 in germany and stayed in the charts for three weeks in total and reached position #56 in switzerland as well, while the tour was a huge success with a majority of sold-out-shows! the “Ravenhead” single “F.E.V.E.R” quickly surpassed 2 million views on youtube.
in the end of 2015 ORDEN OGAN supported powerwolf on a european tour, followed by the first european headlinetour in early 2016, with victor smolski’s (ex-rage) new band almanac and swedish powermetallers manimal supporting. 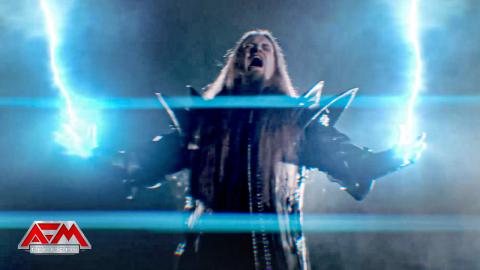